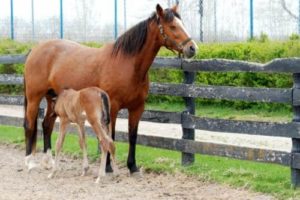 Between four and six weeks prior to foaling, your mare’s udder is expected to grow as her body produces milk. However, there are several reasons your mare’s udder may remain small — with some situations more serious than others. In this article, we explore these.

Six Weeks Prior to Foaling

While mare owners often consider udder size as an indication their mare is ready to foal, udder size can vary considerably from mare to mare.

Likewise, udder size will often decrease during daylight hours, leaving you concerned about your mare’s ability to provide adequate milk.

In short, if your mare is six or more weeks away from foaling, it’s highly likely her udder size will fluctuate or remain small. If you still have concerns as your mare’s expected foaling date nears, consult your veterinarian.

Two Weeks Prior to Foaling

During the last two weeks prior to parturition, the udder will normally swell to the size of a melon. However, if your mare is awaiting her first foal, it’s not uncommon for udder size to remain small, even this close to foaling.

Many mares, including maiden mares, will come into their first milk within 24 hours of parturition. Rather than focus on udder size, turn your attention to your newborn foal. They should be consuming 20% of the bodyweight in milk daily. If this isn’t occurring, you will notice your foal constantly trying to nurse and not resting..

Following foaling, the first drink is the most important. A small or uneven udder is still capable of supporting your newborn foal’s requirements, as long as it provides the right quantity and quality of antibody-rich colostrum.

Consult your veterinarian immediately if your foal:

At times, nursing can be hindered. For example, by an under-developed foal or by a mare that becomes agitated by their foal’s approach to suckle. By evaluating and monitoring your foal, your veterinarian will be able to determine if your mare is producing enough milk.

Three common signs there is a problem include:

In such cases, your veterinarian will be able to prescribe hormones or supplements as needed.